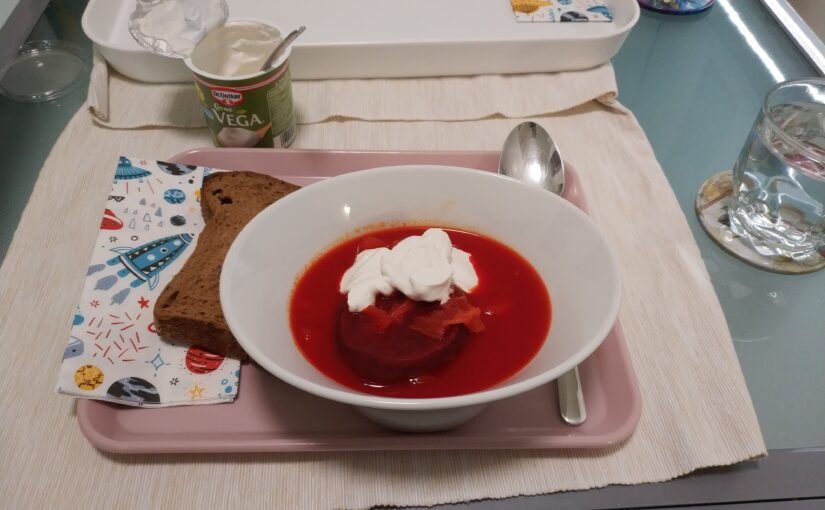 This is my new fav soup and although I tried to prepare it in the past a few times, the result was always, hm, let’s say strange… I learned the proper way to prepare it only some months ago when our Ukrainian friend and collegue invited me and my partner for a dinner. Why she did that? Long story short, due to the war she moved to Budapest from Kyiv and we tried to help her in settling down. In the meantime we became friends and we are learning a lot from her.

I was excited to try Borsch and I was surprised how tasty and complex it is! I asked our friend for the recipe and I already cooked it at least 5 times. I taught it to my mom too and she cooked it already 2 times in the last month. Beetroot is king and now at least we know one more cool way to use it. 😀

What I like about it most is the richness of flavours and that specific “thickness” as it contains so many ingredients. As I start eating I can feel the nutrients flooding into my body: vitamins and minerals from beetroot, carrot, onion, garlic, potato, beans, cabbage, tomato. I serve it with vegan sour cream and toast. It is a great warming food for wintertime, I will certainly cook it to cheer up our coming cold days.

The recipe I got from our friend:

She cooked it with beans, bell pepper and dill for me as I am vegan and has to avoid gluten.

Chop the onion, the carrots and the beetroot. Fry onions on sunflower oil till they are gold, then add beetroot, then carrots, and salt. Roast them a little, then add tomato paste with some water and stew the soup until the beetroot is semi ready.

If you cook it with beans, put them into water the previous evening so that they swell for the morning.

When the soup is boiling add more water and salt, put the beans to boil first, then the chopped potatoes. When potatoes are semi ready, add the chopped cabbage and a few bay leaves.

Serve it with sour cream and bread.

When I cook this soup I set the timer for 10 minute periods:

Many many things happened during this summer. People showed lack of attention to infection danger and swarmed to beaches, events and popular sights. I saw this while we were on a holiday.

I attended a lovely and great event, the Turtle Symposium organized by the TSA, the Turtle Survival Association. The videos of each session are uploaded to Youtube so that anyone can see them. I really recommend watching them! 🙂 Check their page: https://turtlesurvival.org/2020-symposium/

In summertime the vegan activists did not rest. My friend, Pitt did a few videos. I truly appreciate his work and dedication for the good cause. God bless all the people who care about animal lives. Respect. See one his videos:

In November I had the chance to travel to Transylvania – to Erdely, as we Hungarians name that old land. In fact Erdely is bigger than Transylvania, it includes 16 counties and various territories. See: Transylvania – Erdély

It was my dream long since to visit that land. It is like a wonderland with pictouresque montain sites and great woods.

I have a good friend living there and I went to see her at her home, she lives in a village near Szekelyudvarhely (Odorheiu Secuiesc) in Hargita county. She waited me there, at a place called triangle near the main square, as I came with an airport transport called Vandor Szekely (Wanderer Sekler) from Marosvasarhely  Airport (Tirgu Mures).

It was Friday afternoon when I arrived and stayed at her place for two days. Saturday we had a trip around the near landscapes and at Sunday we traveled back to Budapest together, with airplane charter. She is working at Budapest or Vienna mostly, but stays home for a few months whenever she can.

The Transylvanian lands are famed lately for the high number of bears coming near the populated areas, even walking into gardens of family houses. Normally there is no big disruption, as people are used to their presence. But the number of encounters are rising and that’s alarming. There is a ban of hunting as much as I know, and unfortunately, the forests are no more connected due to wood exploitation. The younger bears don’t easily find a new territory for themselves, so the conflict between humans and animals is imminent. During the days I’ve spent in Erdely two incidents were reported about bear attacks, one was lethal. It happened near Marosvasarhely, the victim was a sheperd guarding a herd of sheep.

The population of the Partium, Banat and Hargita county kept to be Hungarian in identity as they are mostly Seklers, even with the numerous repopulation after that the Romanian state was created. Over the North-Eastern corner of the Carpathian curve is Csango land (Chango, they too speak Hungarian). Chango people are considered as the oldest folks in the area – or maybe in whole Europe, with identical cultural traits and astonishing musical legacy. Northern from their place one can find Moldova on the map, where many people they still have their traditional Hungarian language, enrichened with their own, curious sounding words. Those folks are keen to preserve their unique culture which is sometimes quite hard.

What I particularly liked here were the breath-taking landscapes and the typical carved Sekler gates.  Though life is not any easy here for Seklers, as Romanians don’t accept their having an independent identity or any claim of a higher independence level (see the autonomy movement). Under Ceausescu these people suffered a lot from the poverty, the discrimination and the oppression. Well, I guess whole Romania suffered…

All with this, knowing some history I dare to state that these tough, obstinate mountain people are made to survive. Even in the times when Erdely was part  of the Hungarian Kingdom they enjoyed some independence. They proved to be really talented in staying alive among all the hardships, yet, Erdely was considered a wealthy land. I wish they could have a better and easier life today, they’d deserve it.

Unusual and lovely warm sunshine greeted us on all the three days, it was like a blessing. Together we traveled through Parajd, famous for its gigantic salt mine, and Korond, a place famous for high-quality ceramics. We haven’t met a single bear, though my mom asked about them when I called her in the evening. We ate a lot, my friend proved to be a generous host, cooking real good meals for me. All was vegan! Well, she’s vegan too.

The third day we took a ride with the already known Vandor Szekely airport transfer to Tirgu Mures aka Marosvasarhely. At the airport, after a scrutinous and somewhat unfriendly examination we were to wait for our depart. There was a small shop of souvenirs but we couldn’t find up anything with Hungarian text, like “Welcome from Seklerland”, only Romanian stuff. This is quite typical, my friend explained. Romanians have the tendency to make Hungarians feel unwelcome, and the same is true about Seklers or other ethnic groups in the country. I don’t know if this will change, but that would be great. I photoed some of the items in the shop:

Altogether I enjoyed the journey and I feel honoured to be able to go to Erdely, to feel its mystical air and see those ancient mountains with my own eyes. It was like a dream come true, I burst into smiling anytime it comes in my mind. I brought with myself the silent wish&hope that life will improve for the people living there, and for all people in the world.

Sadly, again, I only have time to summarize the past one month. So, let’s see.

The Meetup to meet up with readers took place at 27th of November, where I had the chance to talk more about the book and about the whys. It was a great experience! 🙂

The animation course I attend came to its end this week, and we’ve created a montage from our works. I will post it here as soon as I’m done with it (at place the sound needs some editing). 🙂

Also, I cold participate in shooting a little sequence for SMTV again, which was really a honour. 🙂

The second part of the Remembering Past Lives was streamed at 21th November. We already have it’s link. I hope you’ll enjoy it.  Check here:

Wow, the interview is divided into two parts and the screening of them is scheduled!! 🙂 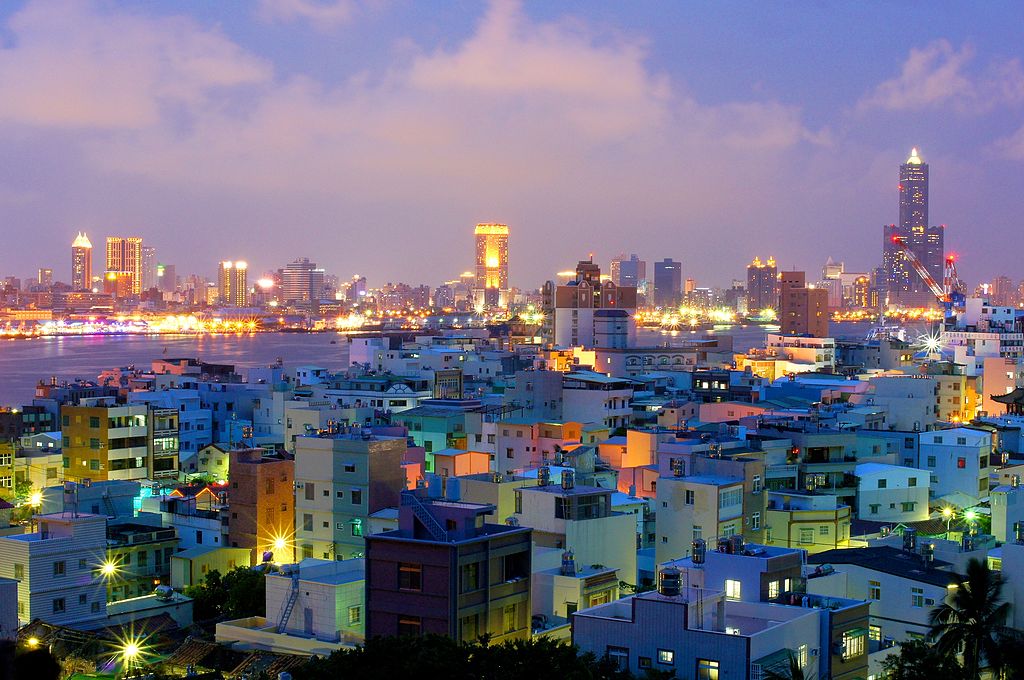 I’ve spent fifteen days in a very special meditation retreat near a southern Taiwanese city, 10000 kilometres away from my home. We were doing karmakiller meditation for many hours each day, to help elevating ourselves, our loved ones, and the planet. I learned here that the island gave home to numerous saints and Buddhist (and non-Buddhist) masters in the past. We glimpsed shrines and temples wide around wherever we went. One could feel something sacred being present in the air… This is one of the most famous Buddhist places close to our retreat:

I saw a lot of gekkos and lizards on the walls and the trees, almost every day. They were so cute!

Our flight was pleasant with the Emirates and quite long, the whole journey took more than 25 hours: Budapest – Dubai, Dubai – Taipei, Taipei – Kaohsiung. We ordered vegan meals when booked the seats and we were happy to see they could cook for us – our food was labeled as strict vegetarian.

My fear from flying almost fully disappeared and on our way back I sat to the window. I could see huge part of Mesopotamia, the Euphrates and the Tigris rivers, and the lines of mountains as we progressed towards (and through) Asia Minor. Many of the places where I once lived lied under us… I am so grateful for the experience!