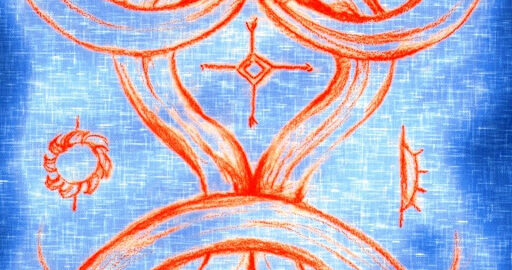 An amazed book series found me a few months ago. The title of the collection is Yotengrit and it consists of four volumes. It describes the ancient philosophy of our ancestors and of whole ancient Europe, probably. Wise old knowers faithfully preserved this knowledge successfully throughout the strict Christian rule and the storms of history. They kept it in secret for centuries and passed it on from master to disciple up until today. The reason why it was allowed to be shown to public: “if our nation is in the danger of ruin, the old wisdom should be brought to light as it can save us from destruction”. The books present surprisingly modern and pragmatic ideas about our world, about our relationships with others, about animals, about men and women. I would recommend it to everyone who can read Hungarian.

I am deeply grateful to meet this set of ideology, it is so rich and so beautiful. The books explain a lot of things I thought about Hungary and Hungarians – as a Hungarian – and proved me that I know too little. So far it is not translated to English but hopefully it will be done very soon. 🙂

Here is an except of its summary (translated by me, using Google Translate):

In the world of our ancestors, Yotengrit, whose roots go back to the (ice) Stone Age, is the name of the all-encompassing ancient spirit, which is also a state of origin.

Yotengrit takes out evil from itself and manifests as a woman-god: UKKO and a man-god: GONUZ, creating a dualism of femininity and masculinity that is very different from the Chinese Yin-Yang dualism, but even more so from the old Iranian dualism, in which there is a good and bad balance, and their eternal struggle is the motor of existence.

In the Chinese philosophical system, femininity is passive and masculinity is active. In the Hungarian dualism, which our fathers preserved from the ideas of the Northern Eurasian-American Ice Age to the present day, both femininity and masculinity contain activity and passivity. Their features are not opposed, but complement each other on a deficit-surplus basis.

This basic approach defines everything, social doctrines, the legal system, but even the life-death relationship.

Yotengrit is all-encompassing but more feminine in nature. It throws out evil from itself, which settles into a harmful force but does not become part of the dual interaction. It is a disturbing factor: he is Arman, the evil, harmful, harmony-disturbing spirit.